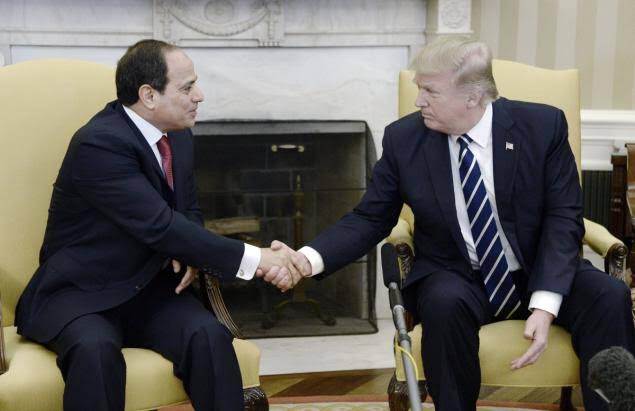 In the news yesterday, Trump rallied behind Egyptian Sunni Arab leader el-Sisi. Human rights and political oppression under el-Sisi are worse than they were under Mubarak. The the handshake scene made my skin crawl.

Yet, Trump’s handshake is even more alarming in light of recent events. Just two weeks ago, Trump expressed his cold treatment to Germany through his refusal to shake hands with Merkel, a strong democratic ally. This is extremely disturbing. The strategy of snubbing democratic allies is best summed up in the slogan adopted by Bannon, “Honey Badger don’t give a shit.” Rather than building bridges, this administration seeks a fight to the death with anyone who will take the bait.

Although he does not appear to be offering el-Sisi any increase in defense funding, Trump and Bannon are doing something far worse. They are networking. During the Obama administration and prior, the US met human rights violators like El-Sisi, Putin and Erdogan with coldness and frequent sanctions.

This coldness represented the US censure on killing innocent people, politically motivated deportations, and arresting protestors. If we erred in our foreign relations under Obama, it was that he and priors did not extend coldness to favored nations, such as Saudi Arabia. Many times over, our country is guilty of enabling cruel dictators like Salman and perpetuating war in the Middle East and globally.

Fast forward to Trump’s America. Trump, Bannon, and populists throughout the world can tighten their grip on their governments without any more policing by the US. How is this turning back the clock? We are seeing Kissinger out in the open; US diplomats using US influence to bolster leaders who further military or financial aims but not human rights aims. This policy always comes at a dear price. Jorge Rafael Videla, Saddam Hussein, and Osama Bin Laden all began as US allies before they murdered thousands.